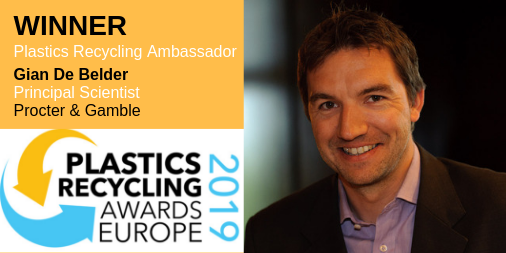 During last week's Plastics Recycling Show Europe in Amsterdam, Gian De Belder, Packaging Technologist at Procter & Gamble received the "Plastics Recycling Ambassador" Award for 2019. Gian is active in many different associations working on improved recyclability and recycling. At Petcore Europe he is not only an active member of the Board of Directors since October 2017 but also the Chairman of the ODR (Opaque and difficult to recycle) PET Working Group. P&G joined Petcore Europe in 2015 as the first FMCG company (since then eight further major brands became member). Gian also runs the Holy Grail project of the New Plastics Economy initiative focusing on markers/watermarks in packaging for improved high-quality sorting and recycling.

In his 20-year career at P&G, Gian has helped drive R&D into sustainable packaging across the company. He has been involved in developing key partnerships across the value chain and managing open innovation through P&G’s Connect & Develop Programme.

Gian is a board member of Petcore Europe and co-chairman of the Packaging Task Force at the A.I.S.E. He is also active in other industry associations such as FostPlus. Most recently, Gian is helping lead a pioneering project on the standardisation of markers/ watermarks in packaging (barcode for recycling), to increase efficiencies in high-quality sorting and recycling.

In 2018, Gian was also official juror for PackTheFuture (Elipso+IKV) and DuPont Packaging Innovation Awards. In 2019, he is official juror of the Sustainability Awards (Packaging Europe). Gian has already been elected finalist for the 2018 EU Plastic Recycling Ambassador (Plastic Recyclers Europe).

Gian is 44 years old and holds a degree in Polymer & Composites Engineering from Leuven University.